Still feeling the effects of a bad cold turning on me with a vengeance. A wee bit depressed at times, but then again it is providing me with a time to sit still and enjoy God's whispers, praying to the Lord as the day goes by....

Little things tend to get my heart down at times...Knowing my dad is extremely disappointed I have not visited him in a while, knowing my mom has been pushing it ..... but - I. Can. Not. At least until I'm well..Sometimes it seems I can't even be sick in peace.

I've had a few tears this week, pressure, pressure...

It has been a little funny though, things need to be done here in our home, things that I normally do by rote. *chuckle* *grin* They aren't getting done...I just can't help it. Sorry Fam. They do so much I definitely can't complain but this has caused me to realize what I do do! : )


I see my girls, and ya know. I see they have grown up to be sweet and Godly women and have kept themselves. Thanks be to God! ... I kept our homeschool God centered as I could. Prayer was the key. Stressing a personal relationship with Christ, first and foremost. Diligent with our core studies and free to venture out on interests...Ministry opportunities were and are paramount.

I see our homeschool support group that used to be somewhat on the same page has gone down, down, down far away from the Lord as the plumb line was ignored years ago.

I will pray as always, because I know God is boss. He is the judge and it's very nice to know the judge especially when He's your Father too. : )

I pray for young men that they would see the Eternal goal. My heart just becomes a little sad sometimes, I see things can become so mixed up so easily and the enemy of our souls is just having a hay-day with them. Mix ups with thoughts and words and the enemy says whoopie. It starts getting like doggie-doo, the more you stir it the more it can stink. (Don't blame me on that little comparison) Blame my dad on that one...But back to my point...I think everyone ends up feeling unappreciated and a little hurt. And I hate that to no end.

What's a mother to do? Pray Amelia. Pray.

I lay here praying. Praying for my girls who really have kept their standards, one of my older daughters I've had to stand back with as she ( Mar) was in a courtship that ended in the hands of jezebel. The young man made his choice to go the wide way. (I wish parents would warn sons about jezebel) Another courter of our oldest daughter was a nice young man, I liked him, we would talk and talk on the phone often and had the greatest of talks ever, most of the time agreeing with furrowed brows, other times laughing out loud together. When we brought him to church the women swooned. But one weekend when he flew in things ended, Lea admitted she had no peace in the relationship. He wept in my arms. I'll never forget it. The fella had been spied by little sister looking at girls on a dating site the night before in our home after Lea broke things off and we had to confront . I think the young man was so devastated by Lea's decision he was in a total irrational panic. After getting caught looking at the dating site in our home, I'm sure he was doubly devastated. My mercy meter was running very low but Christ's love won out. It's strange, that has been five years ago...

People don't know what people have been through many times...I feel worn sometimes, so very worn.

I've seen fire and I've seen rain... Life is crazy. Life is also very good thanks be to God.

We have election time coming and I'm aghast at the lack of importance being placed on the murder of unborn babies.


I have a prolife blog up today for the week and perhaps beyond...
Roe Vs. Wade, What Has Become of Us?

I have a song entitled, Hope by Paul Cardall playing on the above blog...The little baby's giggle is exactly like my oldest daughter's laugh when she was a baby, I hear the laughter like it was yesterday... Like music it was. Like music. She sings beautifully now...Most people don't even know that about her. Her voice is like an angel's voice. There are so many gifts within us! She is a Realtor now and a counselor for a prolife clinic. She is 29 and saving her first kiss for the altar. When God sends, I will applaud. But until then I will never push. God knows what He is doing and when He wants to do it. Plus. I have a great time with our girls! : ) I applaud each day! I applaud each of my daughters, they are whole in Jesus, what God orders I go with. Amen.

There are also some things about me in that blog above too...I literally saw the world going to hell when I was a little girl. And maybe that is why I am so black and white on things now? I know what compromise will do to people. I so know....

The decongestant is wearing off and I'm going outside to get some sunshine this unseasonably warm and balmy day... 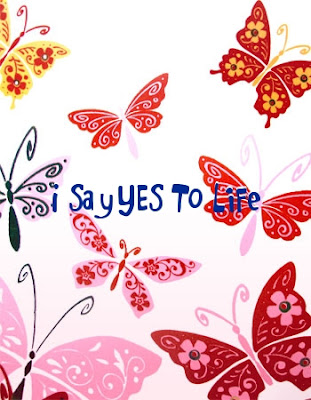 Yes!!! I think it definitely means to yodel more! As a matter of fact, that's what this whole world needs more of- people who want to learn to yodel! It would be a happier world indeed. :D

I sure hope you feel better soon! This is a bad.bad.bug. Sometimes though, the Lord just uses these sicknesses to help us rest and spend some extra time with Him.

Prayer really is *the* thing for all... abortion, elections, rude people, and everything else. God will give us the strength and refreshment in the mean time. (Maybe your being sick is in reality a time for spiritual rest and refreshment for you? I know what it feels like to be battle weary. <3)