In the past several weeks we've seen two wonderful and most grand movies.
The first is Tenth Avenue Angel (1948): 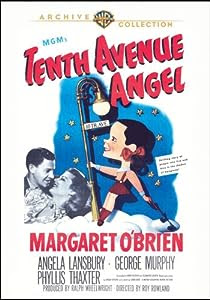 This movie was chosen by yours truly to watch for my birthday movie.  This is soooo darling. My family including four daughters, ages 20 to 31 and beloved Jem...just loved it.  There is even a Christmas miracle at the end.  See it.  You'll love it too!

The folks who live in the teeming tenements lining Manhattan’s Tenth Avenue could sure use an angel. And they have one – Flavia Mills, a little girl with big dreams who touches the lives and hearts of everyone in her run-down neighborhood. Margaret O’Brien plays Flavia with the endearing earnestness that made her the leading child star of the 1940s. A host of MGM stalwarts take other roles: Angela Lansbury as Flavia’s aunt, Phyllis Thaxter as her mother, George Murphy as an ex-con hoping for a second chance, Connie Gilchrist as a kindly neighbor and Rhys Williams as a blind newsvendor robbed by hooligans who implicate Flavia in the crime. Roy Rowland, who directed O’Brien in Lost Angel and Our Vines Have Tender Grapes, guides the story, which ends with a joyful Christmas miracle. And the cinematography is the work of Robert Surtees, who would go on to lens Ben-Hur...among other classics.

Not a dry eye at our house for sure...When the movie was over, we were all looking at each other thinking and saying... Now THAT was a good movie.  Wow.

When you see the movie, take note of the sweet Christmas, and how it flies in the face of most of what modern America thinks is "normal" now.  I don't know about you but the materialism drives me nuts, it's soooo not Christ.

This sweet little gem of a movie really validated and confirmed some things in the way of simplifying Christmas, we are going back to a more old fashioned Christmas, we always have, but this year I felt like I really did accomplish more of that old fashioned spirit, of what I've been trying for. : )

One morning I told Rebecca when she shared she had no money for gifts...I told her to make something if she liked, we would love it and I picked up my little ceramic little baby Jesus on the hay from our manger scene...I said...


Next up is Twelve O'Clock High with Gregory Peck.  This thing was fantastic...I've watched it probably four times in a week being the infp personality and soul that I am... There is something new to see every viewing.

Once again...the entire family loved it.  Totally.  Watch closely from beginning to end...There are a lot of effects and meanings here... Very neat movie.

Okay, this is Gregory Peck's publicity shot from the movie...oh my is he not the man?  Marianna said anything with Gregory Peck's face on it will get readers coming!   *big smile*

This movie is the only one I have seen that truly depicts how the air war was conducted in the 8th Air Force. It is patterned after the events which actually occurred at the 306th Bomb Group in England in 1943. In real life, General Savage (played by Gregory Peck) was General Frank Armstrong, former commander of the 306th Bomb Group; The first bomb group to fly over Germany.

...seen as one of the most realistic portrayals of the heroes and perils of war.  Convinced an Air Force commander is at the breaking point, Brigadier General Save (Gregory Peck) takes over his struggling bomber group.  At first resentful and rebellious, the flyers gradually change as Savage guides them to amazing feats.  But the stress of command soon takes its toll and the weary general reaches his own breaking point.

I'm also thinking that this movie is a great reminder of the sacrifice of our men for our great country.

Check the movies out if you get the druthers, I really do think you too will enjoy them as much as we did.  Two totally different kinds of movies two kinds of greatness.

Why wouldn't anyone not like old 40s movies?  They are made in a time in our country when most of the country had a healthy fear of God.  Enjoy!