One of my most favorite things in the world to do is go to Smalltown with my daughters.  This photo was a day with Miss Marianna.  We have so many memories here in Smalltown, she was a little girl taking piano lessons from sweet Mrs. Blinn with big sister, Li-Li.  I miss Mrs Blinn so much, she was my friend and confidant' as many of you know. You may also know Mrs. Blinn in her younger years actually looked like Greer Garson. She was from the city, and landed in Smalltown, being her husband was a coach for the school.  She later lost her husband and I recently learned her life had been a hard one beside the fact of being left a widow with three children.  Do you know this beloved sweet Christian woman never complained to me once?

I love this description of Greer Garson:

Actress. Greer Garson was beautiful, bright and most of all strong - strong enough to make Laurence Olivier wither in "Pride and Prejudice," and Walter Pidgeon to back down in their multiple, memorable pairings.  Yet when she joined her strength to theirs and others, she became the symbol of a nation unconquered by Adolf Hitler.   Complete bio HERE

One of my favorite old movies with Greer Garson is Mrs. Miniver (1942). 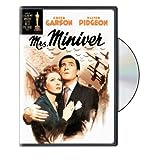 Elements of the film have been well combined with drama, romance, light humour, and finally, tragedy. It may have been given the Hollywood and typical glossy MGM treatment, but it hasn't forgotten either humanity or the sacrifices associated with war time problems.

Showered with accolades and awards at the time, the movie won Oscars for Greer Garson, Teresa Wright, screenplay, William Wyler and Best Picture of 1942.

Mrs. Blinn also lived during the WWII era during blackouts in the city, children from London were sent here for safety to relatives during the bombings.


This is sweet Mrs. Blinn's house...Oh the afternoons I would drive this way and around the corner here, a little baby or bab(ies) in the car too.  This was taken in early spring and the trees haven't bloomed yet.  This neighborhood has one car garages and is representative of the way middle America used to be when children played in the backyards.  Laundry line frames are still seen and used too.  A sweet simple life.  No water parks or complications coupled with ridiculous homeowner fees.  Driving past Mrs. Blinn's house makes us tearie eyed for sure.  Her house is a landmark of sorts for moms like me...I was in our favorite Smalltown restaurant and I hear a table of women...the conversation went something like this:   You know where, it was over near Mrs. Blinn's house...

Today Becs and I went into Smalltown and it is so delightful as always...

We were at the store, the little store where older women can shop in house shoes.  Once I saw a pair of house shoes in the produce department laying so nice in front of the tomatoes like it was someone's private closet.  I later saw the elderly lady who the shoes belonged to, apparently she always did this, those shoes bothered her and no one seemed to mind her shoes in front of the tomatoes, not a bit.  Sooo sweet.

The peaches were 25 cents a pound today!  Can you imagine?  A sweet older man was requesting an entire box and the produce man called him by name... Yes Mr. Watkins I'll have those right out for you.

Mr. Watkins and I had a sweet little chat about peaches.  Mr. Watkins tells me with his sincere baby-blue eyes: I just wash'em with soap and I eat the whole thing ...except for the pit!

I tell him with my big toothy grin... Me too!

He further tells me how he puts'em on cereal and with his ice cream too!  Sooooo darling!

I watched as people would come and look at the peaches but not buy any.  *strange*  I saw a family with youthful kids and the mom said how handy the peaches would come in for smoothies...the teenaged boy just stood there looking unfazed.  *good grief*  The mom and her overgrown "children" just mindlessly trudged away. These kids are like zombies I tell you. I think people are so used to processed, junky, cutesie, lazy warm-up foods they are much like overgrown spoiled children, many adults included...or it could be they are so full of artificial sweeteners that.... their brains have been snatched?

I kept looking around for people to grab with glee these beautiful little peaches for 25 cents a pound and it was only Mr. Watkins and I at this particular time...It is so strange to me, this is the second grocery store trip that I have noticed this strange and sad phenomenon, sadly typical of the modern culture. We don't have to buy into it!

Mr. Watkins is from that generation Mrs. Blount was from, where my parents are from too.  I'm so glad my parents raised me simply.  Mr. Watkins has been through frugal times, he appreciates goodness, and good peaches for 25 cents a pound!   And I do too!  : )

Yes, we are also used to frugal times, I'm not only married to Jem in the country but Jem transforms to George Bailey in Oldtown at our real estate company housed in an old 40s convent. Real Estate is commission only, yes Virginia it can be done.  One income on commission only.  God is good.   I always figure any way I can be frugal, make my own, do without...I add to our family's income!  No spoil-ties (as my Italian Grandpa would say) here!

Becs is making a peach pie for desert.   I'm making some Italian pizza bread for supper with some of Li-Li's stuffed artichokes.  Yes Indeedie.

I was in the mood to blog today and it's plum luverly to do so!

Charlie, one of our rescued fur angels thinks so too!
God bless Y'all!  xxxooo    ~amelia 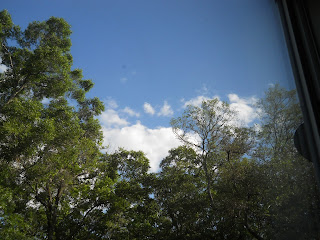 Your Mrs. Blinn sounds very neat. It is so neat to have sweet memories of people like her. The bush by her house is gorgeous - I wonder what it is.

I would love to find peaches at 25 cents a lb. You can be sure I would be buying a lot of them!!

Hi Abbi, The bush in front of Mrs. Blinn's house? It's an Azalea bush, isn't it pretty? They bloom annually.

I wish I would have bought an entire case of the peaches! The price went up to 89 Cents last weekend. Oh such is life eh? Hopefully they will get another glut of them soon!

I would love peaches at 25 cents a pound too! Wow! What is wrong with people? ;) I guess you got a good deal for savoring the moment!

Now, Have you put a garden in this year?