More of The Greatest Generation, I'll Be Seeing You, and...Don't be a Heelot

I thought I'd put up a few more photos of Lea with our great vets from Pearl Harbor!  This is Lea with her genuine Italian Goombadi!  Buddies for sure.  So sweet. 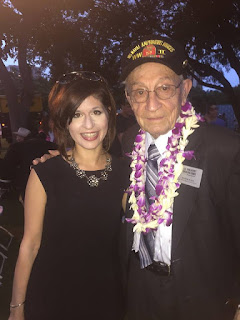 And is this not precious too?  This is Bob.  I think Bob was trying to teach Lea how to ballroom dance, saying "1-2-3" showing Lea the steps....  Lea started laughing at her own confusion and gave up...She just started doing a 60s go-go dance!  Later on the bus, whenever Bob, Lea's dancing buddy would catch Lea's eye, he would put his pointer finger up with a huge toothy smile as if to say...Remember, you are my dancing buddy!  Such a sweetie. 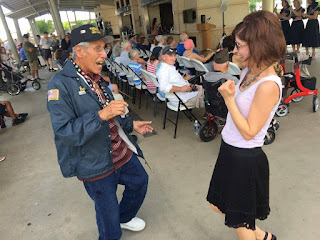 Lea is home now! Thank God for a safe trip! The privilege of being with our vets was a lifetime chance as I'm sure you would agree.  So grateful and happy Lea was able to do that!  She was so very blessed by these brave gentlemen and the memory of those who went before us on those ships.  It blesses my heart that she was able to go do that. 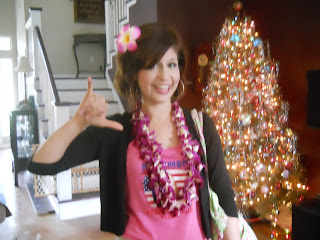 The homefront here, I took this a few mornings ago as dark clouds were coming in, I thought this was appropriate for the Pearl Harbor anniversary with the contrast of the American flag. 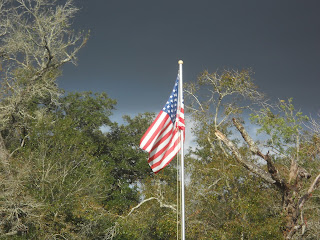 Here is a video with WWII footage with Bing Crosby I found this and thought was neat...

'I'll Be Seeing You'


I've been listening to a World War II Armed Forces cd set with the old Bing Crosby genuine radio programs.  Wow.  The country really pulled together and God was honored.

What's for supper?  Zucchini with pasta gravy over brown rice pasta with ciabatta rolls for those who can have wheat.

We are going to have a family movie night and watch Dolly Parton's Christmas Christmas of Many Colors:  Circle of Love.  Great-great movie!

I'll be seeing you!  Signing off from the Forest Cathedral, Amelia


You may enjoy one of my blogs from several years ago, 'Don't Be a Heelot'

I hope you are having a sweet Christmas season meditating on the real Christmas.

Such a beautiful post, Amelia, and your photos are lovely! Your first photo deeply touched my heart. My father fought in WWII and he died in 1984 at the age of 64. The first photo reminded me of my beloved father. I will look at the sermon video. I love the Bing Crosby video. Thank you so much for sharing, and I hope you have a great week. :)

Thank you Linda. Your father was so young to pass away, that must have been a hard thing for you? Did he share any stories from the war with you? I bet I would have loved to have met him. Lea tells me there is such a difference in the vets from the WWII era, they do not curse like so many do now, they shared with her they did not curse doing the war like what we may hear now either. I agree with her, I never hardly hear that age group use much hard foul language as I hear now. Oh I wish those vets could teach everyone a few life lessons. I was listening to a radio broadcast on Pearl Harbor and they were sharing how un-spoiled those boys were during the start of WWII. For many of them, they received their very first pair of *new* pants when they joined the service back then.

So glad you enjoyed the video, it's very real isn't it. Bing Crosby and others were such nice examples from back then. I just love his soothing voice...

I hope you like the sermon video, I really liked a lot of things he had to say in this sermon. Blogs are so nice in that we can share things we enjoy for other blogging friends to enjoy also! : )

Have a great evening there Linda! Blessings!

I am glad Lea had a fabulous fun trip! She sure looks like she was enjoying every minute of her adventure with them.

Yes, she made some wonderful-wonderful friends in our precious vets. She will be keeping in touch with them. Treasures!

aww... you posted more of my trip pics! Thank you, Mom! That's just so sweet of you! Both my goombadi friend and Bob were such fun. :D Poor Bob trying to teach me to dance... I was a horrible student...! lol But you described his little twinkle in his eye as he pointed to me with that big smile, so well.... what a sweetheart!

And that pic of the US flag against the dark sky is beautiful and sobering...