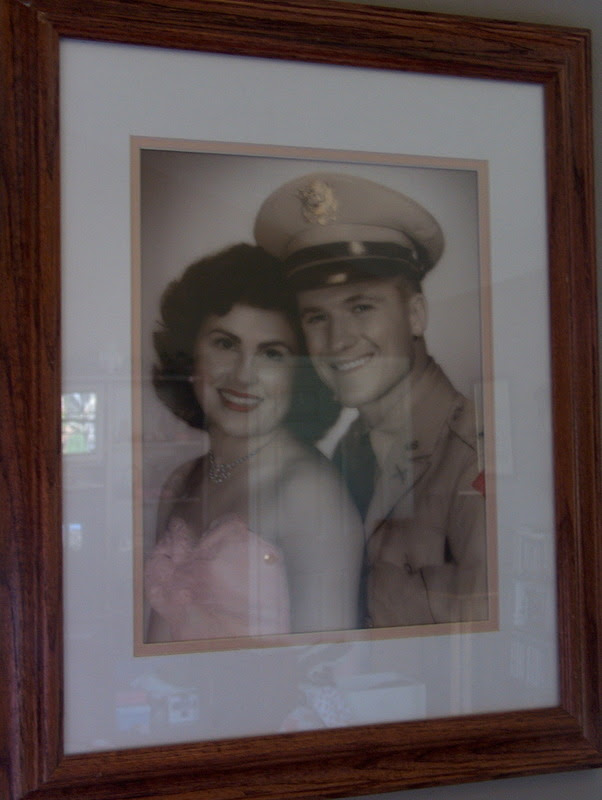 Yes, that is my dad above.  Handsome guy he still is at the age of 85, Mother is pretty too at the same age, after all they were born two days apart.  Yeah... Two Seabrook kids that liked each other since elementary school. Now divorced but friends. Life is like that for many of us, it's the fellowship of brokeness. .... Dad would suffer heartache as a little blonde headed boy...  His mother who I am named after passed a way when he was only ten.  Then he was off to a private military school, never a complaint.  I have a shoebox of his letters written back home.  Precious.

He took a fall.  He's in rehab.  I've had the flu and couldn't go visit him.  I'm an only child so it's a lot for me when anything at all happens, it always has been.  He's three hours away.

Lea and Mar took a drive to see Grampy...  took yellow tulips and a darling balloon to him that he adored.  From what I am understanding Lea was a case all the way there driving.  I would have been too..  It's been un-nerving.  He took a fall and because of blood thinners, he was bleeding internally.  When I learned he received blood I suspected it was the blood thinner that was the culprit.

I confess.  Not only am I one of those Highly Sensitive People (read the book if you like, it explains the way we are wired, a gift actually in many circumstances.)  I'm an INFP personality.   So magnify that and multiply that and you have quite an artful worry wart.  Yep, I'm a chief worry wart, I even worry about my mom being a worry wart and making me worry even more...   I worry and think about everything that can go wrong when stuff like this happens. On some things I'm the rock of Gibralter but medical things... I confess.  I fall apart.  I could have done something in the medical profession, medicine is common in the German side of our family, my Italian uncle trained to be a vet  until life through a curve ball at him...but for me, I don't think I could have taken certain aspects in that field.

My husband has tried to help me, he tells me it's sin to worry, he gives me scripture verses (in a nice way of course)... Yeah.. I know.  But you must realize ...   Oh we have all grown up so differently.  My parents were cautious on many things.   My dad's brother, ten years his senior went to Rice, a drama major, the apple of his dad's eye at 6'3".  He died at 23 of cancer.  Cancer caused by something that shouldn't have been.  I have his dress gloves, I have his bank book and fraternity book filled with manners back then... Yes.  Manners.  ....My dad wouldn't even let my mom use silver knobs on an add-on additon bathroom to our home.  Why?  He said it reminded him of a hospital.  His last memory of his was his sweet mother in the hospital that Christmas season shaking him asking him "Who are you?"  She had been poisoned by the treatment typically given back then in the 30s.

Okay.  Maybe this explains the blogging lapse.  The flu.  My dad took a fall.  I'm fighting discouragement.   One other reason I am fighting discouragement because through planning this wedding I see how sickening the materialism of many modern day weddings has become, the debt people incur...  Just the ideas of what people think are norm.  I will not enter into that!

I don't know about you but I blog for many reasons.  The best times I've had blogging is when I am doing just what I am doing now.  Jotting thoughts..   Not worrying about grammar etc.  My court reporter daughter would have a cow.. (I'm still better at spelling though) ; ).

Speaking of.  Mar was interning at a murder trial last week.  Did you know the court reporter is in charge of the weapon and evidence?  Mar had to carry it around with her last week from the office to the court.  I'm sure hearing details of that courtroom story has not helped my heart.  ...Oh the poor young lady.  She was a Christian so we know she is in Heaven now and her mother has since become a Christian through her daughter's Christian life here on this earth.

Enough of that but let's remember, that there is so much going on in this world... just so much.  Oh that we will be a loving, gentle Jesus to people.

We have recently been so blessed by once again an old movie!  It is soooo wonderful!  Now I am smiling.   : )   Take heart.

The gardener is so PRECIOUS here...  He says:

"I need no friends, I have my Bible and my flowers..."

The children's choir is so beautiful.  These are the sweet things I long for.  Let's make sure and keep our children and youth used to this beauty... Surrounding them with sweetness and an atmosphere of praise.  If we give them the real deal, they will recognize the cheap counterfeit naturally as they grow older.

The movie is precious, just look what someone commented on the youtube.  Oh how true.  And the old fashioned Methodist church my daughter will marry in?   It resembles this one quite a bit.  So lovely, the same time period.

The movie is poignant and humorous at times as the pastor stands against the religious folks (shown in the clip) in more then several instances.  The pastor is so inspiring as in the beginning of the movie it shows that he leaves the new beginnings of a medical practice to become a preacher. Great movie.

May we all have sweet hearts like our precious gardener friend above.  I hope you enjoy the movie clip and will even consider viewing the entire movie with your family.

P.S.  I have been doing a good bit of sewing lately.  I found a cute, easy carefree palazzo pants pattern.  I'm learning my style is carefree in many ways... long flowing skirts, flowing pants when I wear them.  A bit of Stevie Nicks, 40s and Victoriana mixed in.

I've made these long capris slightly taking in the ease middle leg and going back out to the full glorious eccentric width!  Here it is:  Simplicity 1186.

P.S.S.  Why do I not post pics anymore of the Forest Cathedral and our family?   I don't have a camera these days.  I do hope to get one soon.  I've been without since before winter.  I've been depending on hub's camera phone pics.   : )