Two Sweet Friends Have Crossed Over to the Other Side. Howard and Raymond.

Howard recently passed away, we found out yesterday night. As volunteers we are not told these things due to privacy policies so we have to call the home to inquire simply asking if they are there...and this time they tell us, he is not there.

We just saw him several weeks ago, I had told him it didn't matter what church we go to as long as we have a personal relationship with Jesus...He is so cute and matter of fact....He tells me: "I'm glad to hear you say that." We tell him we love him and I adjust his gown again...Bye Howard...We love you Howard.. 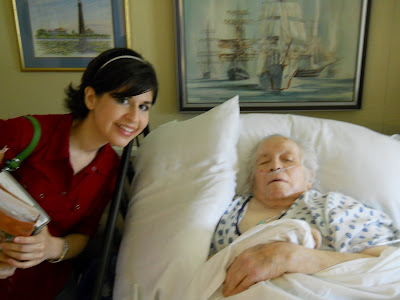 He told us we could take his picture this time. This is Li-Li and Howard recently.

My blog from last June on our sweet friend, Howard: Our Sweet Friend, Be Still and Know 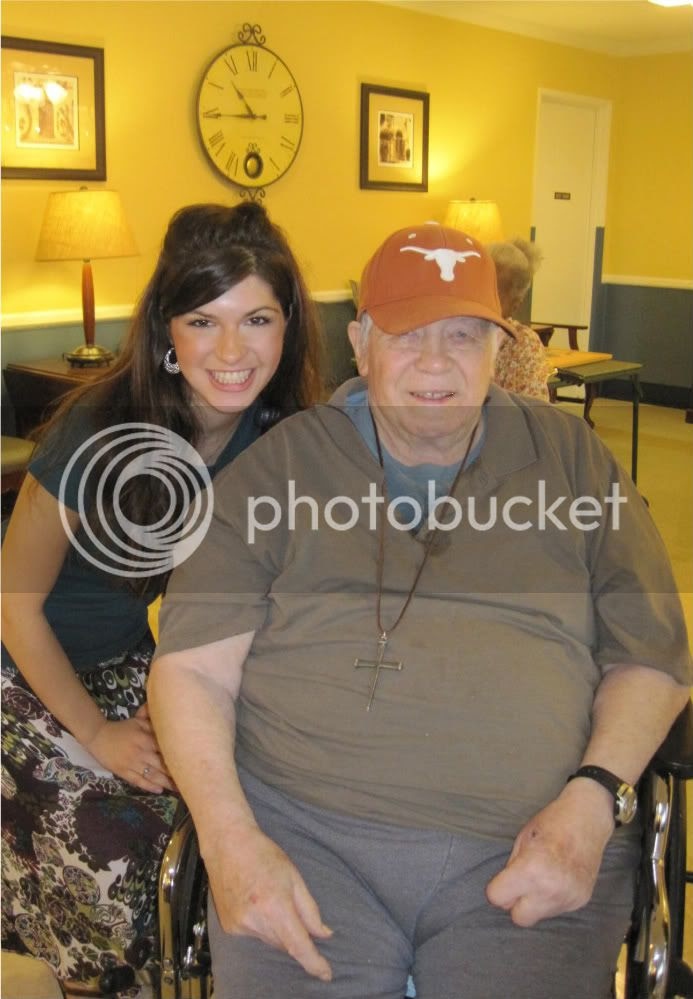 Here's Delle and Howard, Delle would go visit him on her way to work sometimes. Howard didn't have children, he had never been married. He and Delle had a special little relationship, so sweet. I had seen Delle rush to him several months ago after we had all sang...That little gal knows how to rush when necessary. I've seen it in her several times in emergencies. Something just clicks in with her and she thinks fast and moves it.

On another note, we were coming home late the other night from some very close friends'. The drive had been way too long for this late at night and sleepy eyed we had passed Mr. Raymond and Cathy's home in our area. It was strange, it was close to 1am and all the lights were on in their home. Usually it's dark and you can see a family of deer sleeping in a grove of grass in their backyard in the moonlight...But not this night. Every light was on in the house, more than several cars were outside.

We found out yesterday night Mr. Raymond also passed away. We were going to visit Raymond this weekend. Raymond and his wife Cathy would bring our family dinners when I was on bedrest with Becs...He called the birth center repeatedly when I was in labor, he cried at church in Sunday school describing his care for our family... and little baby Becca.

We were just laughing and joking with him last year, we had a ball with he and Cathy at a homeschool graduation party. You see, elderly Mr. Raymond thought we were weird back when, because we were homeschoolers. ; ) We had to prove ourselves to him back then.... Our little girls quickly became as grandchildren to him.

He asked me at the homeschool graduation party: What made you move back here to the country? Me: Oh...a little older and wiser now....I smile my big toothy grin at him and he looks to his plate knowingly. He laughed and told me how I used to make fun of redneck people in Smalltown (My bad totally).. Makes me ashamed now how stupid I was then, how I thought the grass was greener in the suburbs. What a joke that was...Now I'm back but Mr. Raymond is gone, life is crazy.

What had happend to Mr. Raymond?

An operation went bad, the effects eventually caught up with Mr. Raymond.

Life is so very strange at times.

What is stranger is so many people be-bop around as if none of this means a thing. Whether it's the twitter cyberworld where people ho-hum...she lost two people this week. Or neighborhood people rushing about to earn popularity points....there is something wrong these days I do believe.

What is right in the world? There truly is a remnant of people who love the Lord and love others and show it. There may not be many, but they are sprinkled throughout our world. If we have the special blessing of crossing paths, then it is just that: A Blessing.

May we be the Mr. Raymond's who care for others and show it.

I miss you already Mr. Raymond. I'll see you on the other side...

Know what you mean. A former parishioner just called my husband, as he is dying. Not too old of a guy. Never came to church no matter how much my husband reached out to him, for 10 years when he was the pastor there for all that time. Now, when we have not pastored that church for 4 years, and he dying, he calls for my husband. They had a hard time tracking us down although we still live in the area. My husband went and visited, me, too, and the man made a confession of faith. He seemed sincere. Don't know how much time he has left on this earth. We tend not to think about stuff like this. But our lives could be snuffed out at any moment.

Yes, we live in this facebook,tweet,twittered world where REAL relationships don't mean a thing anymore.

community is not community anymore because we live in a society that "needs" nothing. everything is handed down to anyone in need.

thank the lord, there are still a few with a vision for a godly home.

Awww. My heart is sad about hearing this news.

I hope all is well, my dear!